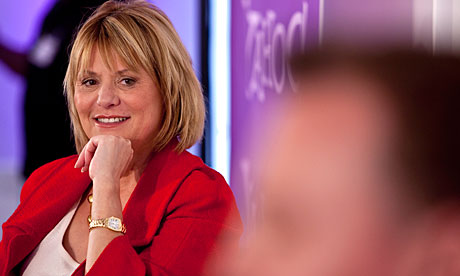 Beleaguered and overshadowed by powerful competitors, the internet company Yahoo and the mobile phone manufacturer Nokia are pooling their expertise in an effort to regain an edge in crucial services such as maps, chat, navigation and email.
But an alliance between the two companies got off to a rocky start as Yahoo’s chief executive, Carol Bartz, lost patience with criticism of the speed of her firm’s turnaround and delivered a four-letter rebuke to an interviewer at an industry conference.
“I don’t want to hear any crap about something magical that the fine people of Yahoo are supposed to do in this short time, so fuck off,” Bartz told Michael Arrington, editor of the influential blog TechCrunch, in front of an audience of technology gurus at the annual TechCrunch Disrupt gathering in New York.
Bartz, who took the top job at Yahoo early last year and has a reputation for salty language, made it clear that she had little time for complaints about the pace of change at the Silicon Valley company, which has fallen second fiddle to Google in internet searches.
“I’ve been at this company 16 months,” said Bartz, complaining that her critics seemed to expect her to turn Yahoo into the next Apple computer empire overnight. “I’m supposed to have an iPod, an iPad, an iBlah.”
Lukewarm
Her outburst came amid a lukewarm reaction to the latest step in Yahoo’s attempted resurrection following years of tepid growth and investor frustration. Bartz has forged a deal with Finland’s Nokia to create co-branded applications, partly aimed at the millions of new mobile users in the developing world who use their handsets as their sole way to connect to the internet.
Under the agreement, Yahoo will provide chat and email services on Nokia handsets. For combined offerings, the European phone firm’s present internet brand, Ovi, will by supplemented by the words “powered by Yahoo”. Meanwhile, Nokia will bolster Yahoo’s mapping and navigation services on the web, which presently lag far behind Google’s global mapping.
“This is two powerful consumer brands working together to bring even better services to potentially billions of people around the world,” said Nokia’s chief executive, Olli-Pekka Kallasvuo, at a press conference held at the Nasdaq stockmarket in Times Square.
On the surface, the tie-up seems a formidable combination. Yahoo is the web’s leader in display advertising, while Nokia is the world’s biggest manufacturer of mobile phones, making roughly four out of every 10 handsets globally. But both companies are under fire for being outmanoeuvred by rivals.
Nokia last month warned of weak profits as it struggles to produce a compelling smartphone to match Apple’s iPhone and Research in Motion’s BlackBerry. Meanwhile, Yahoo has been outflanked by Google on online search and has failed to keep up in maps, which have become a crucial element in online information.
No game changer
The alliance garnered only weak accolades from Silicon Valley commentators. Yahoo’s shares edged up by 1.8% to $15.75 during early trading on Wall Street.
Michael Gartenberg, a technology analyst at Altimeter Group in California, said: “It’s two companies that have both lost a lot of relevance in their relative spaces that are both looking to reclaim that. There doesn’t seem to be a whole lot here to indicate how they’re going to do that.”
Gartenberg said that although the combination makes sense, it was difficult to see it as a game changer: “The centre of gravity has shifted to Google, Apple, Research in Motion, Microsoft. I’m not sure how combining these things together helps them gain ground on those competitors.”
At Yahoo, a new management team is trying to shift a perception that the internet firm is simply a smaller, less successful version of Google. The company’s share price is far below a $33-a-share takeover offer tabled by Microsoft two years ago but vigorously opposed by Yahoo’s board.
Bartz was installed to succeed Yahoo’s co-founder Jerry Yang and it is not the first time that her impatience has bubbled over into intemperate language.
During a conference call with Wall Street analysts in April last year, she complained of the poor productivity she encountered on arrival at Yahoo: “We had a lot of people telling engineers what to do but nobody fucking doing anything.”