At least 11 people, all women and children, have died in Bangladesh as a fire swept through one of the biggest slums in the capital Dhaka.

Sunday’s fire broke out in the early hours of the morning in the densely populated area, destroying more than 500 homes.

Officials said the blaze started in a rickshaw garage as thousands of residents in the Boubazaar shanty town were sleeping.

“The victims were five women and six children. They were burnt to death,” local police chief Rafiqul Islam told reporters from the scene.

“The fire service and the locals have brought the blaze under control. Scores of people were also seriously injured,” said Islam.

A stove or a cigarette end was suspected to have sparked the fire, he said, adding that residents were scouring through the debris and ashes in search of their possessions.

The shanty town is home to low-income people such as labourers and rickshaw-pullers, many of whom have now been left homeless.

More than 120 people were killed in June 2010 when a fire at a wedding party destroyed six buildings in the densely populated old part of Dhaka. 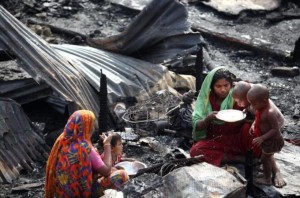